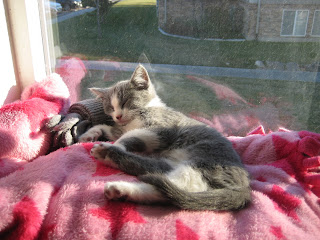 I’ll admit it, I am a crazy cat lady. But I am not the typical old lady that collects hundreds of cats, I just want one kitten! Is that so much to ask?
I drive Mark crazy because I often bring in strays and bathe them…
A couple weeks ago the sweetest cat followed me into our apartment when I was bringing my laundry in. He was so cute and I was bored. I had a couple hours before I had to go to work. So I was playing with this cat and totally loving it, but he smelled horrendous. I knew that Mark would be mad if our apartment smelled so I decided to give this cat a bath. As I was washing him I sang “Smelly Cat,” by Pheobe to keep him calm. He was so good in the bath, I only got one little tiny scratch! But then I tried drying him with my hair dryer and he wasn’t ok with that. He was still wet by the time I had to go to work, so of course I couldn’t put him back outside in the Rexburg winter, so I wrote Mark a note and told him he could let the cat out when he was dry.
Long story short, I don’t think Mark had the hart to put him outside so we decided we would keep him for the night and then take him to the animal shelter the next morning.
That night was brutal! We put my laundry hamper in the living room for him to sleep in, he loved it! All was going well until about 4:00 am when he came to our bedroom door and started meowing. I thought if I ignored him he would go away…but he didn’t. And Mark had to wake up in a couple hours to go to work. So I got up and took the cat outside to go to the bathroom, hoping that would do the trick. But it didn’t. Eventually we let him in our room. He jumped up on our bed and slept right inbetween mine and Marks’ heads!