For Christmas my awesome dad gave me and Mark tickets to the Rose Parade and Rose Bowl! It was on New Years day so on New Years Eve day we drove down to Southern California and stayed with my cute grandparents. We ate dinner and watched a little of Dick Clark’s Rockin’ New Years Eve with them.We couldn’t find any channel that showed the ball drop in New York at 9 😦 We were already tired and figured it would be smart to go to bed since we had to be up so early the next morning to get to the festivities! So we said Happy New Year and were in bed by 9:30 pm…party animals! It was a good effort but neither of us could sleep. It seemed like every time I was about to fall asleep Mark would roll over or cough or fireworks would go off.
We woke up bright and early at 4:30am and were out the door by 5:30! We were very lucky and didn’t hit any traffic until we were in Pasadena and we were able to find away around it all and got a great parking spot thanks to advice from Mark’s brother. We made it to the bleacher and were in our seats with krispy kreme doughnuts and hot chocolate 40 minutes before the parade started! We didn’t know the floats were already lined up and we could have walked right by each of them, I would have loved to do that and look at the detail on all the floats…oh well! We loved the parade, especially the Bomber fly over, the Carsland float, and the military home coming (the wife and little son had no idea their husband/dad was home and in the parade!) I cried 🙂 I don’t really like watching parades on TV but they are so worth it in person. Yes, I did just say that the parade was worth waking up at 4:30 am for. 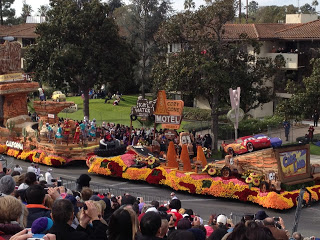 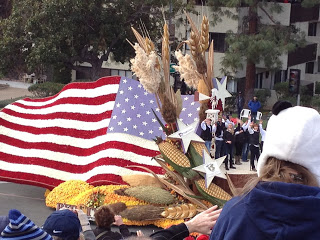 After the parade we followed the masses to the Rose Bowl Stadium for the Tailgate Party. Is it sad to say that the tailgate may have been our favorite thing of the whole day? All you can eat BBQ (I got a chicken apple sausage and my life will never be the same! AMAZING!), salads, wings, drinks, fruit, cookies, you name it, they had it! We sat in the huge tent eating ourselves fat and happy. Then we lounged in there for about an hour people watching!

Once we were full and it got too crowded in there we headed across the parking lot to the Stadium. We wandered and took our time. We finally got to our seats and the pre-game festivities started. The bowl game was Stanford vs. Wisconsin. It started with another fly over by the Bomber, which is amazing. Then both school’s bands went out and performed. Wisconsin’s was amazing and made the Stanford band look like the amateurs they are. They are so embarrassing and make me not want to root for Stanford. I can’t even count how many people were in the band but didn’t have an instrument…
Anyways, they game started off looking like it was going to be a blowout by Stanford but ended up being a close and exciting game! We had a blast (except for the frat boys sitting behind us spilling their beer all over us. I think between the 3 guys they had about 21 beers…they didn’t even know what game they were at or what the score was.) Other than that we had such a great day, it was the perfect way to start off 2013! Thanks for the experience dad and all the awesome tickets! 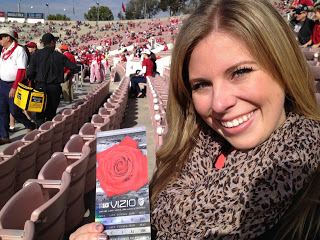 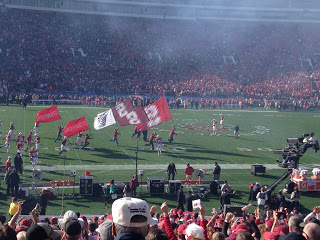